Microsoft analyzed how users of its workplace tools interacted with each other in the pandemic.

People are now spending more than double the time in meetings and receiving almost 50% more chats.

More than half of surveyed workers say they’re overworked.

If you’ve been exhausted working from home in the pandemic, here’s some alarming new research that could illuminate why. People are now spending more than double the amount of time in meetings compared to before the pandemic, and they’re getting bombarded with chat messages from their colleagues.

That’s according to an analysis, released recently, of the interactions that took place over this past year on Microsoft’s suite of workplace tools such as Microsoft Teams. The data cement what many workers have felt firsthand: Working from home creates a host of challenges that make it harder to get real work done.

“The digital intensity of workers’ days has increased substantially,” the report said.

The graph below charts the time users spent in meetings over this past year (in blue), as well as the chat messages they sent each other (in yellow). Both measures spiked in March as companies sent their employees home and kept rising throughout the pandemic. 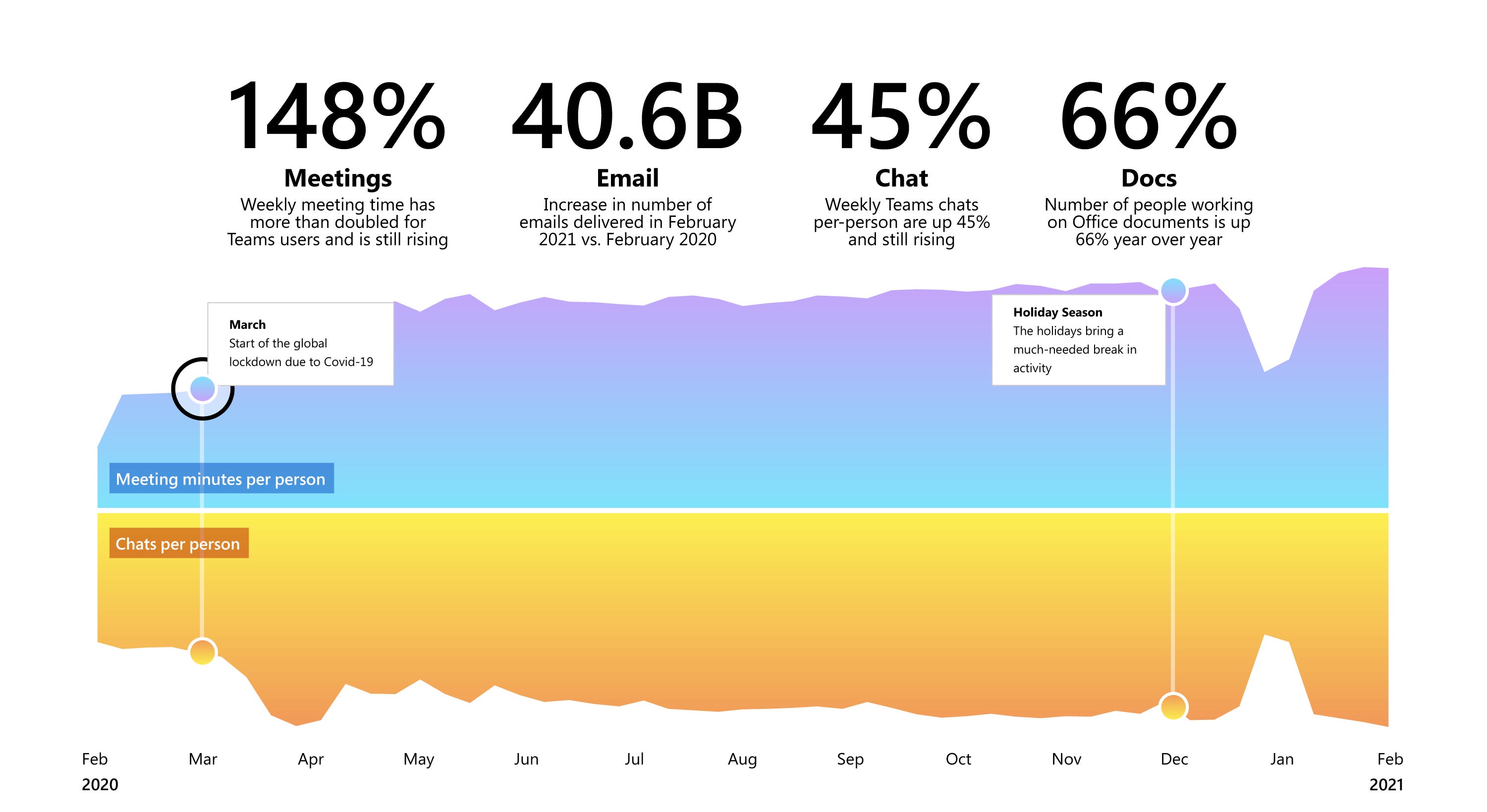 Both meetings and chats have soared in the pandemic.

By February 2021, workers spent 2.5 times as many minutes per week in meetings compared with February 2020, and they were sending 45% more chats per week to their coworkers. They also sent 42% more chats to each other outside of regular business hours.

It’s no wonder that workers are burned out: In a survey of about 30,000 full-time or self-employed workers that Microsoft also released on Monday, more than 50% of respondents said they were overworked. Other surveys have shown similarly widespread levels of burnout. If people are spending more time attending meetings and responding to messages, they have less time to perform their actual jobs during regular business hours.

That often gives them no choice but to keep working through the evenings or on weekends to get everything done. In fact, people do appear to be working longer hours in the pandemic, by anywhere from 49 minutes to three hours, depending on the study.

Even before COVID-19, endless meetings and digital overload have been widespread problems in corporate America. Businesses have deployed some small fixes over the years: Years ago, Google built a “speedy meetings” setting in Google Calendar to encourage shorter calls. But now, several companies are doing more to intervene on behalf of exhausted employees. For example, Citigroup told its employees on Monday that it’s banning internal video calls every Friday (although it’s still allowing phone calls).

“The blurring of lines between home and work and the relentlessness of the pandemic workday have taken a toll on our well-being,” Citigroup CEO Jane Fraser wrote in a memo obtained by CNBC. 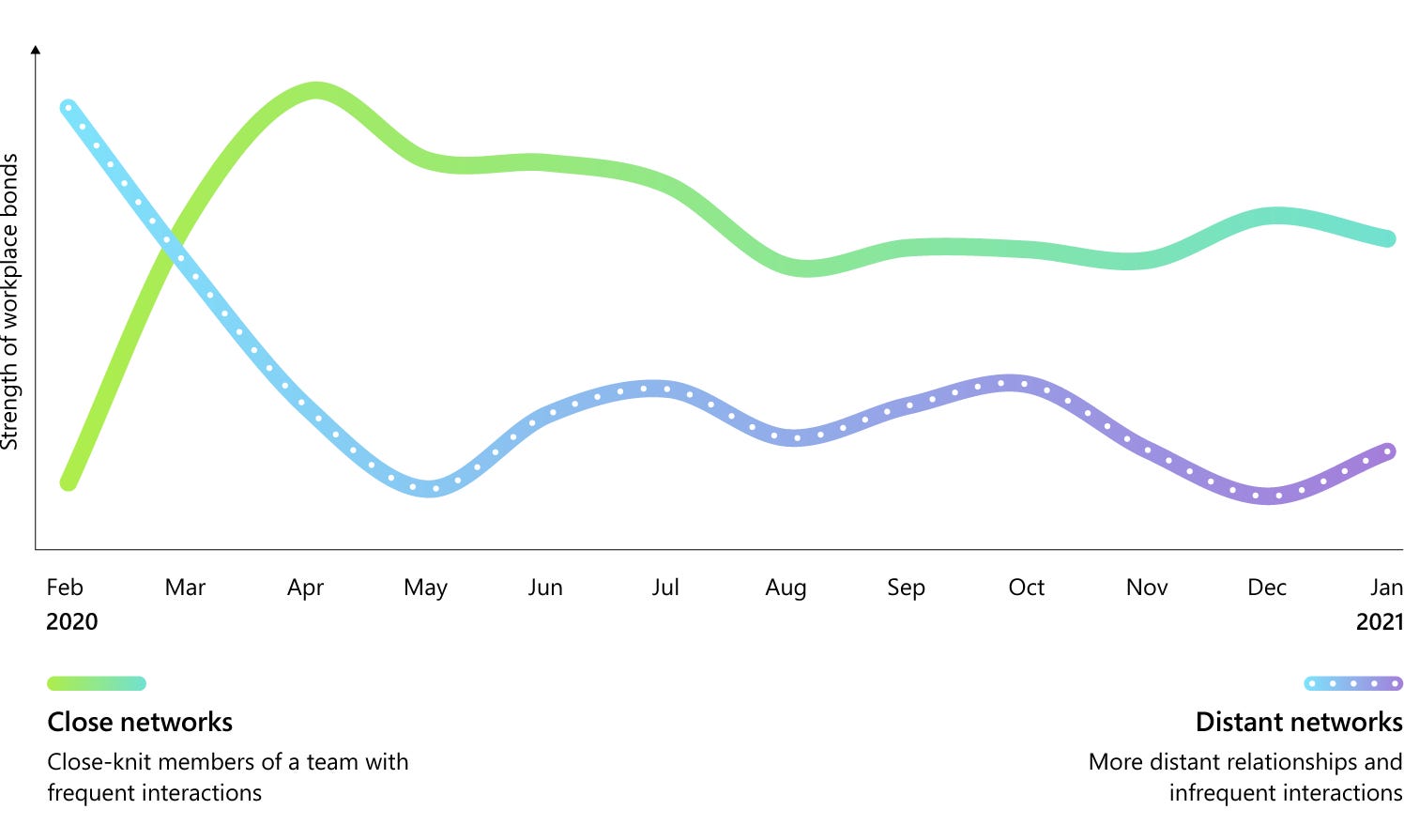 Teams have become siloed in the pandemic.

“When you lose connections, you stop innovating,” Nancy Baym, a senior principal researcher at Microsoft, said in the report. “It’s harder for new ideas to get in and groupthink becomes a serious possibility.”

Interestingly, in New Zealand, where lockdowns eased once the country effectively stamped out the virus, a measure of team isolation improved, according to Microsoft.

In a separate blog post that was released in tandem with the research report, Microsoft said that it’s going to allow more of its workers to return to the office if they wish to do so, starting on March 29. It announced in October that, after the pandemic, its employees will be working a hybrid workweek, in which they will be working from home less than 50% of the time.

Want to join the discussion?
Feel free to contribute!